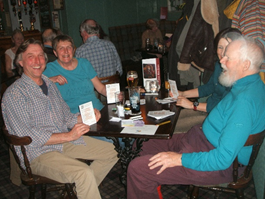 In February of this year, four members of the association gatecrashed the Vienenburg association’s Burns’ Night. Pearl Hamilton delivered a splendid Immortal Memory and your chairperson addressed the haggis in a somewhat faltering style which the audience thought was ‘the way it should be done’ but was caused by having a microphone in one hand, a knife in the other and a translator-come-prompter nudging his ribs. At least we managed to make sure that the haggis was stabbed at the right moment and not returned, as had happened in the past, to die in the kitchen at the hands of the chef.

We enjoyed another successful quiz night in the Red Lion Lounge. About 50 people took part – not all members. We again started with a round of mystery objects from the Falconer Museum’s great collection before continuing with the more conventional rounds in which most people had many of the right answers on the tips of their tongues where they sadly remained. The funds raised are always a source of great glee to our treasurer but, as he hastens to add, the social dimension of the occasion far outweighs any other benefits.