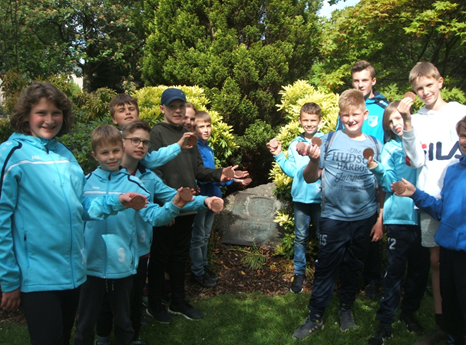 At the end of May, Forres Soccer 7s welcomed 36 Vienenburgers – 22 boys, one girl and 13 adults (parents and coaches). This was JSG Harly’s second visit in three years, Forres Soccer 7s having visited Vienenburg last year. As previously, the Vienenburg boys were housed in the pavilion opposite Anderson’s primary school which was very convenient for the boys were obliged to have an educational ‘experience’ while here.

The twinning association organized (but did not pay for!) the transport from Aberdeen Airport to Forres and back, arranged accommodation for the adults some of whom stayed with members, and gave the group a whistlestop tour of Forres which included the Tolbooth, Nelson’s Tower and Grant Park. I have included a report on that tour below:

On the Wednesday afternoon, after a well-deserved night’s sleep and a morning spent in Anderson’s Primary School, the young Vienenburgers were taken to see something of Forres. As time was limited, their tour consisted almost entirely of a visit to the Tolbooth and a visit to Nelson’s Tower.

In the Tolbooth Courtroom – currently undergoing a makeover – they sat in the seats where the forces of law and order dispensed justice (a long time ago) to Forres’s ne’re-do wells (could there have been any?) They then visited the police office in the basement where they lined up against the wall, had their heights measured, and had mug shots taken before visiting the gloomy cells where prisoners were kept overnight or for longer depending on their misdemeanours. It seems that when the administration of justice moved to Elgin many years ago, one poor chap was forgotten about, as he was lying there, still as a tailor’s dummy and covered with a piece of sacking and completely unresponsive to the stimulating questions which the young Germans put to him – even after they tickled his feet.

Then it was on and up to Nelson’s Tower. Although this visit was all part of the ill-conceived plan to tire the German boys out before the big game on the Friday, they all enjoyed the experience.

Understandably, they didn’t have a clue who Nelson was, but both Tower volunteers on duty that afternoon were very knowledgeable local Germans. So, by the time they escaped and returned to Grant Park, they knew everything worth knowing about the great man – 1805, The Battle of Trafalgar, getting one over the French (and the Spanish) and why on earth the most northerly Nelson Tower in the world was to be found in Forres? The colourful episode involving Lady Hamilton was left for another day.

Finally, when they had all gathered in Grant Park, they were informed about Alexander Grant – the local man who gave the park to the town. Their interest could not have been greater when they heard that he was the man who invented McVitie and Price chocolate digestive biscuits and – to a man – they all bravely volunteered to try one when a packet was produced. They were then set the task of finding an ornamental stone somewhere in the park which carried a plaque upon which was inscribed the word ‘Vienenburg’.

With the speed of light they dispersed and, within five minutes, they found the stone placed there 35 years ago when the Forres-Vienenburg Twinning Association was founded. Whether it was the desire to find the word ‘Vienenburg’ or the desire to win more chocolate biscuits which inspired them is difficult to say.

An historic photo was, however, taken which brought all these elements together – Grant Park, youngsters from our twin town having a great time in Forres and, of course, chocolate biscuits.

The AGM was held in the almost-completely refurbished Court Room of the Tolbooth. There were no outstanding issues. The treasurer and the chairperson made their reports and all members of the committee stood down and were all re-appointed.