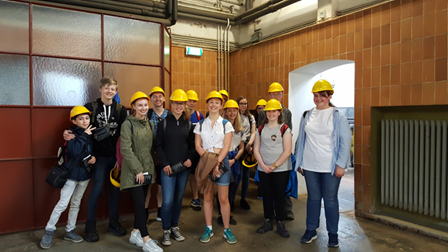 A group of six pupils accompanied by two members of staff went to Vienenburg in mid-June. The association gave £200 towards the cost of the trip. I’ll let Emma Harris, PT Modern Languages at the academy tell the story:

A small group of pupils and staff enjoyed a very successful trip to Vienenburg in June.  6 pupils from S4, S5 and S6 accompanied by Emma Harris and Neil Moir took part in the visit from Monday 15h to Saturday 20th June.

The four girls and two boys met staff at Inverness airport to travel to Amsterdam and onto Hannover before catching a train to Goslar where we were met by Guido Igelbrink, Nicole Vopel ( staff at our partner school) and the exchange partners and their families who had given up some of their holiday ( Pfingsten) to meet and transport us to our accommodation for the week.

We stayed at the Goslar Youth Hostel which proved again a very cost-efficient and practical base – the weather allowed pupils to make use of the sporting facilities on offer and we also made use of their BBQ huts to have a Grillenfest with the exchange partners and their families on the Tuesday evening.

Following the successful “mini exchange” format from two years ago, all the pupils had been partnered with a pupil from the Vicco von Bulow Oberschule and had been in contact before our arrival. The German pupils accompanied us all week (as part of their Projektwoche) and the Scottish pupils spent Thursday afternoon and evening with their partner and their families enjoying a meal in their home.

On our first full day we were met by Burgermeister Martin Mahnkopf at the Rammelsberg Mine for a press photo shoot (hard hats and all!) where we were officially welcomed to Vienenburg and Goslar and enjoyed a fantastic tour of the mine.

We then had an audio tour of the Kaiserpfalz, courtesy of Goslar.  The pupils enjoyed time to explore Goslar and do some shopping.  We then enjoyed a BBQ at the hostel with Guido as Grillenmeister!  The headteacher – Frau Kegel – also joined us for the evening

During the week we spent most mornings in school – the pupils were given tours by the pupils, the Projektwoche was explained to us and a chance to see what different activities were on offer.  Our pupils then spent break and lunch with their exchange partners.  We had a formal welcome from the headteacher, Frau Kegel, and were made to feel very welcome by all pupils and staff.  We enjoyed trips to Braunschweig and Wolfenbuttel where we took part in a bowling evening and also managed a trip to the Vienenburg Freibad where the pupils enjoyed the diving boards and slides despite the sun failing to appear until we left.  All pupils had an enjoyable afternoon with their exchange partners being shown great hospitality and having an opportunity to learn more about German life and to practise their own German.On the last day the pupils worked together all morning in school to produce posters about their week together.
We visited the Vienenburg Lake, walking the “Forres Weg (Way)” before hiring boats on the lake to profit from the sunny weather!  The school held their Schulfest which took place on a glorious afternoon where we saw the culmination of all the different activities during the week. On a beautiful sunny afternoon we were treated to the school band, a rap from a group of pupils,  cocktails, sausages and a variety of games and activities all organised and prepared by the German pupils.  We also had the chance to speak to some of the pupils we had welcomed in Forres last year. We had a formal goodbye where we were presented with some lovely mementos of our trip and where I had the opportunity to formally thank the school, Guido and Nicole for a wonderful programme.

On the Saturday we managed to get a bus tour of Hannover and a nice lunch in the town before heading home – tired but having had a fantastic week.

The families of the exchange partners played a big role in helping with transport   but Guido had also managed to arrange to get a minibus from a local youth organisation to transport us to school each day!  We also managed to successfully make use of the great German public transport for our trips to Braunschweig and Wolfenbuttel. The pupils completed surveys which showed they enjoyed the week immensely and all felt that the opportunity to see German daily life and culture and meet with the families and enjoy time in school added an extra element to the trip.  Their confidence grew daily and although there were some difficulties with shyness between some partners everything went well in the end.We would like to thank the Vicco von Bulow Oberschule for hosting us and especially Guido and Nicole for all their work organising a successful week.  We would also like to give our thanks to the Forres-Vienenburg Twinning Association for their kind contribution towards the costs of this trip.

As a result of the Vienenburg association donating a few years ago a very fine trophy to be awarded to the best foreign athlete at the Games, our association gets semi-VIP treatment at the games. We get a seat or seats in the enclosure plus an endless supply of tea, sandwiches and other goodies. This was very enjoyable. The problem this year was finding a foreign athlete. The usual invasion of Australians doing the highland games circuit did not take place this year so our association’s representative had to make a pitch invasion to see if he could find one. He was guided towards a sturdy-looking fellow who was about to putt the shot and who happened to be from Germany – not from Vienenburg but from Kassel, a mere 75 miles away. I told him in my best German that if he performed well I might have a prize for him. He told me in his much better English that that would be very fine but also alerted me to the fact that his daughter was also competing and had finished 3rd in the 100 metres. After some discussion, we decided with the Games officials to award the trophy to the daughter – Valeta Riedel who was quite overcome with joy at this unexpected bonus of coming to the Forres Highland Games.